It’s been almost two months since our last Dev release so lets welcome 47.10. This one has tons of stuff in it. I have to stress this could be one of our more unstable Dev releases but we need to get this stuff into the wild.

So…. 1) Make backups of your campaigns and customs. 2) Always treat each release as a stand alone release and only copy your data forward from older versions.

Lots of bug fixes and some really cool new stuff. Sprites in the logs, Keyboard short cuts displayed on Screen (CTRL-K) to close, Damage decals for tanks, we continue to work with Princess on map reading and navigation, numerous data fixes, added the AGoAC Maps, and Rec Guide 1,2 and Golden Century units. Also updated Derv and SimonLandmine maps. Check out the new camo and portrait chooser (which will be heading to MekHQ in the next dev release). Deadborder continues to do sprites like a mad man with the start of new Protomek sprites.

Things will be slowing down for MegaMekLab for the foreseeable future. So just a few bug releases here. But we’ve added the ability for Small Support Vee’s to use and track ammunition.

Wow…I don’t even know where to start.

Most of the work this release has been on tons of bugfixes, with some minor enhancements thrown in. However, there are a few larger changes. The first is that there are some new personnel statuses that describe various forms of personnel death.

There have been significant additions to the MekHQ Options to allow more customization in MekHQ. The largest enhancement from this is fully customizable date formats in MekHQ. There are more coming, and Windchild is looking for more ideas for options to add for this (no promises that the ideas will be implemented, but he’ll take a look). 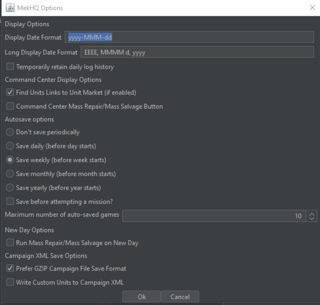 Non-Combat TO&E forces have been added, allowing you to designate forces for support vehicles, HQ defense, or similar. These won’t have any missions generated for them in AtB.

You can get them here