Going to start this off with a very important statement. The next few Development releases of programs will be UNSTABLE they contain several major internal reworks (see Internal Changes below), lots of bugfixes, and some enhancements. Basically we are working on taking the programs (especially MegaMek) from a Crossbow CRS-X to a Crossbow T

We know from experience that when we say its an unstable release that players generally stay away. But you can run both a stable release (0.48.0 or good dev release 0.49.7) you just need to keep them in separate folders.

But for MekHQ things are not backwards compatible so if move your campaign from an earlier version to this you can’t go back. But you can keep backups and play in both versions to see the difference.

We do have some good new stuff in MegaMek. Some highlights are:

Juliez continues to work on improving the look and feel of the lab. This includes:

The Death Module has been merged, adding Random Death to MekHQ. There are three provided methods, from which we highly recommend using Exponential Random Death with the following settings to simulate deaths. It also includes data-based random cause generation, which is customizable as a user data file. 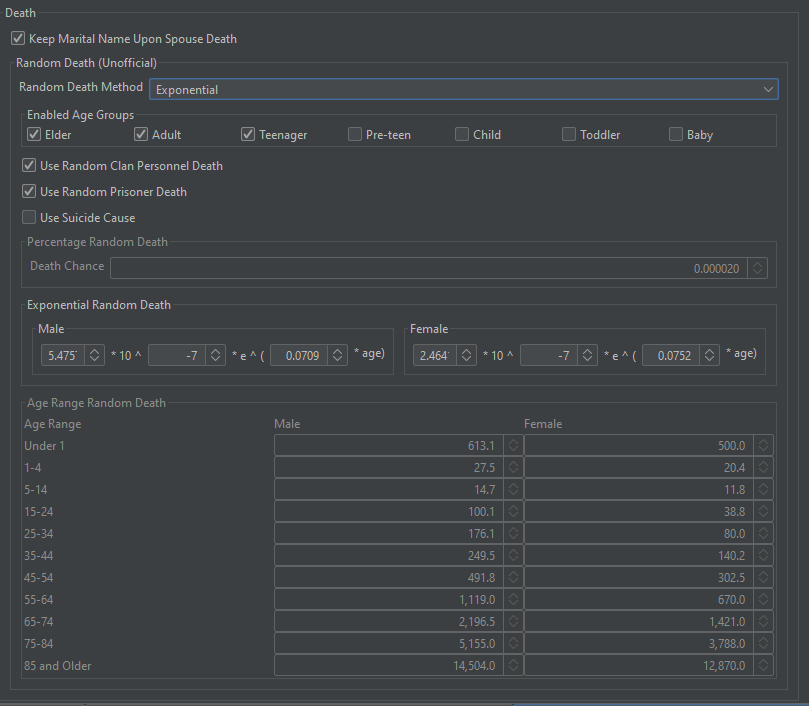 We’ve also added a bunch of new MekHQ Options to improve MegaMek launch stability on low resource systems, unit status colouring to the personnel unit assignment menus (this is theme-dependant), conventional fighters to the unit market, standardized potential asset terms with loan terms, and added the semiannual term for assets and loans. This is in addition to a whole host of bugfixes.

Boring but important stuff ahead. If you are a interested in the guts of how the programs work this be for you.

We’ve started to modernize and rework our internal connection setup for the first time in fifteen years. This necessary change will almost certainly cause further issues, but we cannot find them without further testing. We’ve handled a lot of uncaught exceptions that have been raised since 0.49.7, dating from the earliest days of the suite to the modern day. We continue to modernize the logging setup, with just a few legacy setups remaining. We’ve also added the build date to the logs. Updated all our dependencies to their latest release bar XStream. XStream is the only outdated setup left, with its replacement of either Jackson or Moshi being an open discussion before the required swapover for 0.50.0. Our unit testing has been updated to JUnit5, from a mixture of JUnit 3 and JUnit 4. Finally, we’ve cleaned up yet more of our internal underlying code issues, primarily in MM.

I wanted to thank Windchild for tackling this and the other coders for reviewing the code. They’ve dived into our “Shed in the backyard” and by doing this we know the short term pain will be for big long term gains.

We are still working on the development portion of the current dev cycle. Primarily, we need to handle player Java 17 support (currently blocked by bugs in Gradle, our build language, when it comes to multi-project builds), player save game issues (currently blocked by the above and Jackson or Moshi support), and connection stability issues (there’s been regular connection stability reports since our early dev releases in this cycle, without traceable causes).

Until we resolve these issues we can’t move ahead with a new Stable, and we have no ETA for this. With a milestone of 0.50.0 we need to make sure we get it right.

We’ve updated to Java 11, which means you’ll need to update to use the [b]0.49.x development branches[/b]. As Java is now open source, we recommend Adoptium Temurin 11. We have a help page for Windows and [Mac](https://megamek.org/wiki/mac_issues.html. Further, for Linux, you should be able to use your package manager to install Adoptium Temurin from their repository. Finally, all our automated tests (with the exception of MegaMekLab) are done with Temurin 11.

This is VERY important - We don’t support any version of Java higher than Java 11. Making sure when downloading and installing you are grabbing Java 11, Java 17 in particular breaks the programs hard!!

We are also happy to announce we have an official MegaMek Discord. This is now our primary community location for the suite, providing superior voice support, individual channels, and assistance for the official public servers. There are also the following community Discords with regular MegaMek channels, namely Everything BattleTech and Classic BattleTech. We are also on Facebook, at MegaMek BattleTech and MegaMek for our group and page respectively.

UlyssesSockdrawer has been running a popular Solaris VII campaign on our Discord that is always looking for new players. You can join between cycles. Join the Discord for more information.

When we started the Slack, we wanted to move the MegaMek community from forums to a more interactive platform. While in the beginning the Slack had a small active community it’s just never taken off like we hoped.

We’ve made the decision to open a MegaMek Discord after seeing the success of the MegaMek channels in other Discords. Since opening the Discord it’s grown to 1900 members with 800-900 active members and is much busier and interactive than the Slack has ever been. The Discord platform has allowed us to better support players with things like voice channels linked to dedicated servers.

After careful review and discussion among the Devs we decided to close the Slack June 1st, 2022. We feel it will be more effective to focus and continue to build the community on Discord.

Please check out this workaround for Mac Operating Systems.

Please check out this document for contributing to the suite. Deadborder has us covered from land unit sprites and camos. But we desperately need sprites for aerospace units.