This release is a nice mixture of suite-wide internal changes, bugfixes, errata, and new MegaMek, MegaMekLab, and MekHQ features. This release is also the first one that has seen some testing by our newly created QA team. Please join the official MegaMek Discord if you’d like more information or to volunteer to join the QA team.

We have made the change to Java 11, meaning you’ll need to update to use the 0.49.x Development Releases. As Java is now open source, we recommend Adoptium Temurin 11 (the name change is solely a rebrand on their side, and no changes are required if you’ve already downloaded OpenJDK 11). We have a help page for windows and macOS. For Linux, you should be able to user your package manager to install OpenJDK from their repositories.

MegaMek has seen a lot of fixes, and a ton of basic internal code cleanup to improve its readability and stability the goal being to find unknown and unreported minor bugs. In addition to the fixes, we have a few new things. The Blood Stalker SPA has been coded, active probes now reveal hidden units on the move, princess has a new ignore target command, tons of unit fixes and new fluff for units, and lastly Rec Guide 19/20/21 have been added.

Tech Progression in the programs

Starting in this release we’ve made some changes to tech progression which will impact MegaMekLab and MekHQ. Previously 100% of our data was based on the Interstellar Operations tables. But officially the tables in TRO Prototypes, and RS NTNU are considered the accurate ones. We’ve consolidated the three tables into Megamek updating both our static and variable tech ratings.

If you weren’t aware we have two versions of tech progression built into MegaMek (Static and Variable). Static was based on tech levels circa 3071 we have now moved the static tech levels to 3145. Variable tech level is what we recommend using (enabled in the game options) as it tracks equipment moving from experimental to advanced to common(Tourney legal). This becomes important to be able to build the Rec Guide units, and any future units CGL produces for the ilClan era. It still allows for older eras to be played, but with static on you’ll see some differences versus older published material.

The lab hasn’t had a lot of stuff done in the last couple of years. But Juliez our dev that likes improving look at feel of the programs decided to work on the lab a bit. You’ll notice big changes to the UI and UIX - showing ammo and max damage on tooltips, tab-based scroll panes, improved readability on the large craft crit tabs, and improvements to the Mech crit display. Additional improvements are planned see here for more. Our goal to keep moving MegaMekLab from the ugly ducking of designers to the premier one. Lastly, all of the MegaMekLab dependencies have been updated and a few bugs have been fixed.

Force icons have been completely reworked, with the Kailan pack replacing the former MekHQ pack and the graphical components updated to be consistent with Portraits and Camouflage. There’s also a ton of new options for pieces added in this swap over, including the new operational status indicators shown in the examples below. 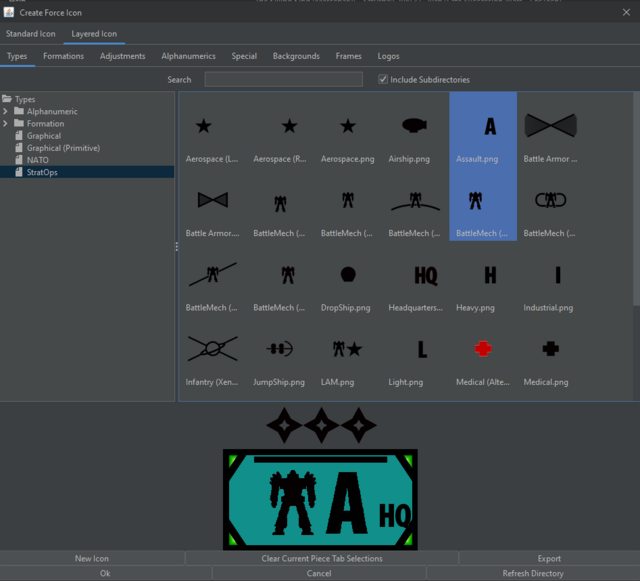 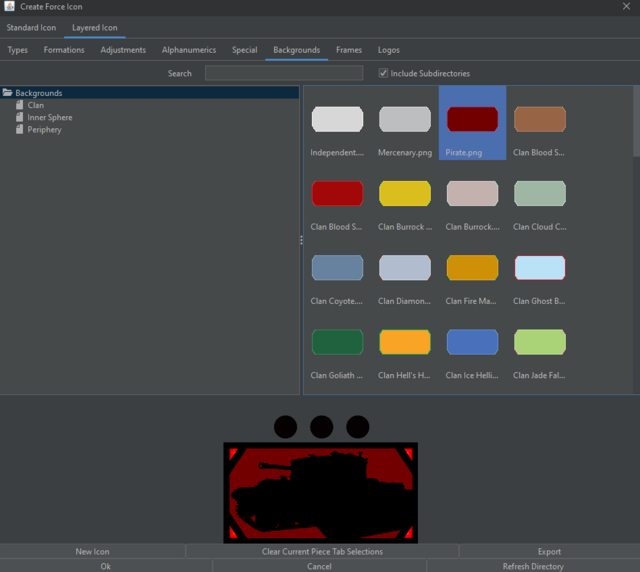 The Marriage and Divorce Personnel Modules have been merged, adding Random Divorce, Weighted Divorce Surname changes, and a ton of other new options.

These changes are joined by some new death-related Personnel Statuses, the Dates and Other Personnel Table Views, the non-AtB Scenario View has been improved, and there’s been a bunch of bug fixes.

Dry Technical Stuff (but important for the future of the projects)

We’ve made several significant changes to our internal setup for this release. First, we’ve migrated our Log4j to Log4j2 2.17.1. This was done out of an abundance of caution, as MegaMek previously used Log4j1 with the most vulnerable regions pre-dating even that implementation.

However, there have been significant performance and security improvements and hence we determined a complete swap over was in our best interest going forward. Second, we’ve migrated to Gradle 6.7. This is a necessary step towards supporting Java 15 and beyond and fixes a few major Gradle build failure cases. Third, our default RAM allocation has been increased to 2/1/2 GB for MM/MML/MHQ respectively. This change has been made to reduce the disconnect and processing speed issues, as a follow-up relating to the Java update.

We are also happy to announce we have an Official MegaMek Discord. It will function like our Slack but gives us better voice support for those who use the official public servers. Also a reminder to drop into the Slack channel to meet other players and harass the Devs that drop in and out. If Slack isn’t your thing check out these Discords with MegaMek channels - Everything BattleTech and Classic BattleTech.

UlyssesSockdrawer is running a popular Solaris VII campaign on our Discord that is always looking for new players. You can join between cycles, which run on a regular basis. However, it is going on temporary hiatus after this cycle, return date TBA.

We think we now have a [url=https://megamek.org/wiki/mac_issues.html]workaround for Mac Operating Systems[/url].

Enjoy everyone and on behalf of the entire MegaMek Team; Thank you! for playing and wishing everyone the best in 2022.