Welcome all to 0.49.4. This release is a nice mixture of bugfixes, errata, and new MegaMek and MekHQ features.

We have made the change to Java 11, meaning you’ll need to update to use the 0.49.x Development Releases. As Java is now open source, we recommend Adoptium Temurin 11 (the name change is solely a rebrand on their side, and no changes are required if you’ve already downloaded OpenJDK 11). We have a help page for windows and macOS. For Linux, you should be able to user your package manager to install OpenJDK from their repositories.

MegaMek is now version protected. You can no longer load a save game nor connect to a server if there are version differences. Please note that this was never supported, but was previously possible. Skill Generation has been completely rewritten in MegaMek, with new requested methods, standardized dialogs, and a far more workable backend for future use. 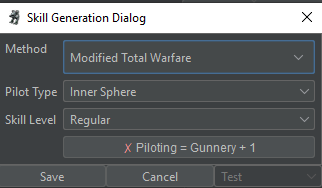 We got some new errata implemented (Infantry Damage and StratOps Anti-Air). The menu bar has been updated and rewritten. Updated vibrobombs that they are properly revealed and active probes detect them. Implemented some fixes that will hopefully reduce the disconnects plaguing this release cycle. Deadborder continues to update sprites to match the kickstarter art and we’ve got another hundred or so in. Plus we continue to add fluff data to units. We reminded Princess that careening around the battlefield with infantry still on board is not the right thing to do.

Final note, in the release notes you’ll see reference to dockable unit detail this is a newer feature and is very experimental but feedback would be appreciated.

MegaMekLab has had an errata change, a bugfix, and its versioning improved. However, it continues to be quiet as the dev focused on it is currently taking a break.

Windchild’s glad to (finally) announce the New Campaign Project, a complete rework and expansion for starting a campaign in MekHQ. Wave 1, and thus 0.47.4, introduces Campaign Presets, the replacement for Game Presets. Campaign presets handle a full options setup for a campaign in a single file, instead of just the campaign options. Their options are divided into startup options, which only affect new campaigns, and continuous options, which can be applied to new or current campaigns. Wave 2 is already in progress, with a spoiler post coming soon. 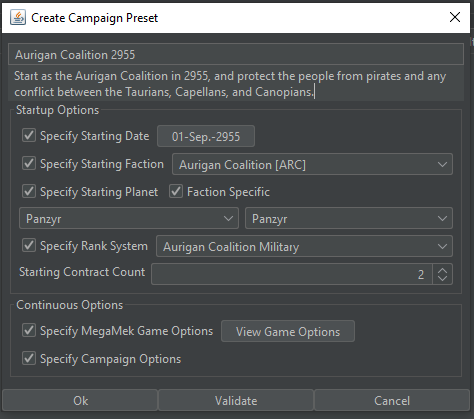 There’s now a menu to assign personnel to a unit from the hangar tab, all of pre-existing menus relating to person/tech to unit assignment and vice versa have been standardized, and the assignment is now based solely on personnel roles. This is outside of Crewmembers (Vehicle and Vessel), Console Commanders, and Tech Officers, which will be handled in the future due to pre-existing internal implementation oddities. Note that the image is from a test campaign, where the camouflage being broken shows that camouflage is working properly.

We’ve also added support for Tripod BattleMechs, properly layered force camouflage (Windchild - my bad on that not being implemented from the start of the camouflage changes), total XP earnings tracking, the Maintainer unofficial SPA, a few new minor campaign options, and moved era definitions to a data file (albeit in their barely used state).

Finally, there have also been a bunch of bugfixes.

StratCon has seen a bunch of bugfixes since 0.49.3.

We are also happy to announce we have an Official MegaMek Discord. It will function like our Slack but gives us better voice support for those who use the official public servers. Also a reminder to drop into the Slack channel to meet other players and harass the Devs that drop in and out. If Slack isn’t your thing check out these Discords with MegaMek channels - Everything BattleTech and Classic BattleTech.

UlyssesSockdrawer is running a popular Solaris VII campaign on our Discord that is always looking for new players. You can join between cycles, which run on a regular basis. However, it is going on temporary hiatus after this cycle, return date TBA.

We think we now have a [url=https://megamek.org/wiki/mac_issues.html]workaround for Mac Operating Systems[/url].