Welcome to 0.49.2 this release is back to a mix of big fixes and some cool new features.

But first a word from one of our sponsors; Are you tired of fighting super-strength meks, are those Tau Zombies getting you down, try the new fully functioning Anti-TSM spray available in SRM and LRM varieties. Available at fine weapons dealer near you.

There are a lot of fixes, big additions, and subtle changes in this release. Please give the change logs a close look for everything. But some highlights:

We’ve have officially made the change to Java 11, meaning to use the 0.49.x Development branch you’ll need to update.

Due to changes in downloading Java that Oracle has made, As Java is now open source, we are recommending players use OpenJDK 11. We have a help page for windows and macOS. For Linux, you should be able to user your package manager to install OpenJDK from their repositories.

We’ve added board tagging, Adds the “tag” key word for board files so boards can be tagged, e.g. tag “Forest (Auto)”, tag “Roads (Auto)” , tag “I like this map” for more details on this feature see HERE. We’ve modernized the princess configuration dialog and it has numerous improvements see HERE for details. We’ve also added additional unit label display options.

Players now have option to provide their email address to the server (which is not shared with the other players). If the server has a local SMTP server configured, round reports can be emailed to players.

Hidden Units now default to on to reduce issues coming out of MekHQ. The RAT generator now includes space stations. We have added all the Rec Guides up to 18, and Deadborder continues to pump out updated and new sprites. Finally we think we’ve taught princess that crossing water with holes in your armor is bad.

MegaMekLab has had a bugfix, but has otherwise been quiet as the dev focused on it is currently taking a break.

The Advance Days Dialog is complete and replaces the old popout for the daily log while expanding its former functionality. It is designed to be left open if desired while handling ones day advancement needs. 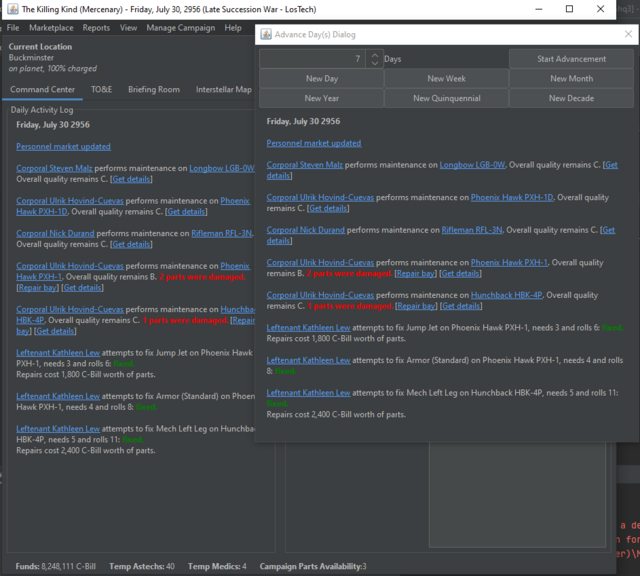 The Unit Market has been rewritten, and because of that is now available outside of Against the Bot based on one’s Campaign Options.

However, these were both coded before 0.49.2. The focus for MekHQ over the past two months has been in bugfixes, bug prevention, and code improvement.

If you aren’t familar with Stratcon see HERE

We are also happy to announce we have an Official MegaMek Discord. It will function like our Slack but gives us better voice support for those who use the official public servers.

Also a reminder to drop into the Slack channel to meet other players and harass the Devs that drop in and out. If Slack isn’t your thing check out these Discords with MegaMek channels - Everything BattleTech and Classic BattleTech.

We also have a player running a very popular Solaris VII campaign on our Discord and it’s always looking for new players. You can join between cycles, which run on a regular basis.

We think we now have a workaround for macOS.

Another reminder when moving between versions:

CHANGE LOGS (for this release only) AND DOWNLOAD LINKS